The Center for Computational & Data Science (CCDS) at the Syracuse University iSchool presents a Virtual Research Talk with Saiph Savage.

The Future of A.I. for Good

The A.I. industry has powered a futuristic reality of self-driving cars and voice assistants to help us with almost any need. However, the A.I. Industry has also created systematic challenges. For instance, while it has led to platforms where workers label data to improve machine learning algorithms, Dr. Savage’s research has uncovered that these workers earn less than minimum wage. We are also seeing the surge of A.I. algorithms that privilege certain populations and racially exclude others. If we were able to fix such challenges we could engender greater societal justice and enable A.I. that better addresses people’s needs, especially groups we have traditionally excluded.

In this talk, Dr. Savage will discuss some of the urgent global A.I. problems that her research has uncovered. She will present how we can start to address these problems through the proposed “A.I. For Good” framework. Her framework uses value sensitive design and social justice frameworks to understand people’s values, the challenges they face, and rectify harm. Dr. Savage will present case-studies where she used this framework to design A.I. systems that improve fairness, well-being, and quality at work. She will conclude by presenting a research agenda for studying the impact of A.I. in society; and researching effective socio-technical solutions in favor of the future of work and countering techno-authoritarianism. 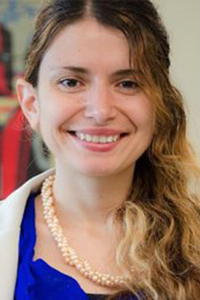 Saiph Savage is one of the 35 Innovators under 35 by the MIT Technology Review, a Google Anita Borg Scholarship recipient, and a fellow at the Center for Democracy & Technology. Her work has been covered in the BBC, Deutsche Welle, and the New York Times, as well as published in top venues such as ACM CHI, CSCW, and AAAI ICWSM, where she has also won honorable mention awards.  Dr. Savage has been awarded grants from the National Science Foundation, industry, the United Nations, and has also created collaborations with both Federal and local Governments where she has driven them to adopt Human Centered Design and A.I. to deliver better experiences and government services to citizens. Dr. Savage has opened the research area of Human Computer Interaction at West Virginia University, and Saiph’s students have obtained fellowships and internships in both industry (Facebook Research, Twitch Research, and Microsoft Research) as well as academia (Oxford Internet Institute). Saiph holds a bachelor’s degree in Computer Engineering from the National Autonomous University of Mexico (UNAM), and a master’s and Ph.D. in Computer Science from the University of California, Santa Barbara. Dr. Savage has also worked at the University of Washington, Carnegie Mellon University, and Intel Labs. She has been a tech worker at Microsoft Bing, and a crowd research worker at Stanford.